In the Tank, Sports

In the Tank – Sports Business Journalism with Brendan Coffey 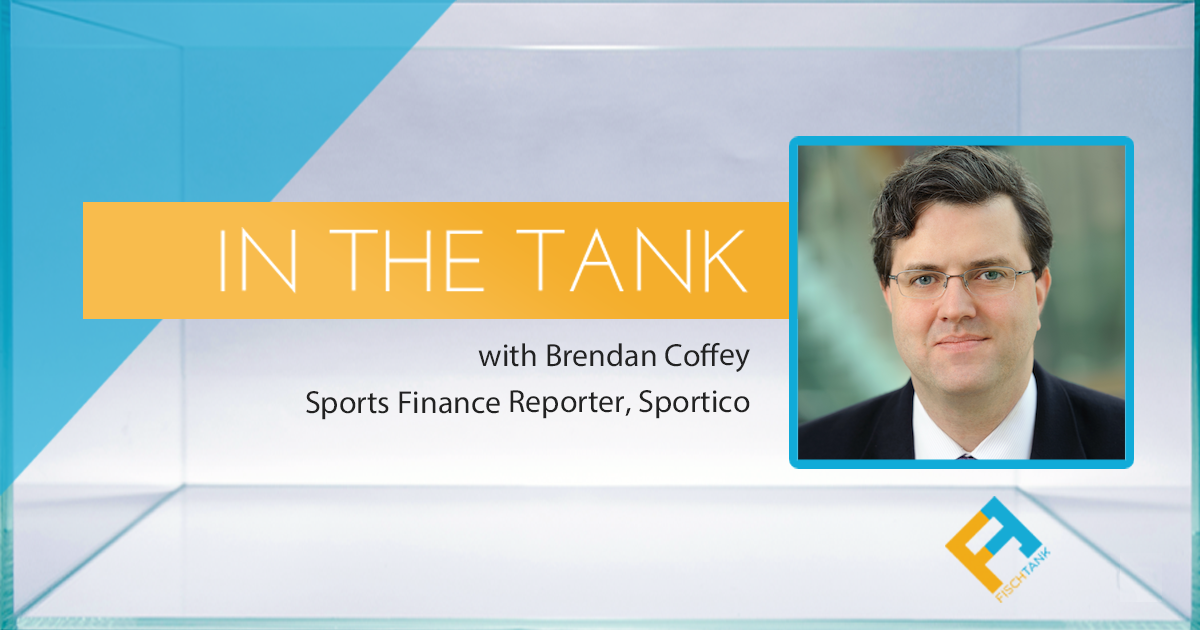 This month In the Tank, we talk to Brendan Coffey, sports business reporter with Sportico to discuss building a new media outlet, how sports and business have heavily merged, and how PR pros can work with reporters to provide value.

FischTank PR: Tell us about Sportico and what it’s been like building a new media entity from the ground up. How have you established yourself in the broad sports market?

Brendan Coffey: Sportico’s been a great experience. The opportunity came out of the blue for me: I was freelancing and got a call on Memorial Day weekend last year from Editor-in-Chief Scott Soshnick telling me about the publication he was starting. The opportunity to join the first-rate editorial team he built to cover the sports business was hard to turn down – so I didn’t! I’ve covered all sorts of topics in my career, from commodities to billionaires, but sports business is one I hadn’t covered before regularly. I had worked a bit with Scott when we overlapped at Bloomberg News and he wanted to use my extensive experience covering Wall Street and markets to bring a level of sophistication to sports business that hadn’t been done before. So since I joined in time for the launch last June, I try to do that as the sports finance reporter for Sportico. More broadly, all of us on staff work under the guiding principle of telling people something they don’t already know. A lot of times that’s exclusives, but also very often just adding that extra line of context drawn from our wide experience. So far, response from readers has been tremendous.

Over the last few years with the rise of some prominent sports personalities, the race to be first and break news on social media has often trumped the importance of being right or telling a full story. How do you balance both in the digital age of sports reporting?

In some ways, our mission makes it a little easier to work in this environment. Our core readers are top-level executives in sports business – the teams and companies in media, technology, banking, investment funds etc. that touch the sector. To an extent, that group values a smart take with context more than just speed. But of course, everybody likes to be first to know something too, so we work hard to provide both – to be first and be smartest. Social media is really important for us as it is for just about everybody, but last I checked Twitter and Facebook don’t pay our bills, so we strive really hard to get our exclusives and breaking news out as stories and use social as a means to an end, rather than just bragging rights. As someone who really focuses on the finance side, I find there is still just a tremendous amount of information that insiders know or is buried deep in regulatory disclosures that aren’t easily found on social media anyway. In that way the job is a lot like it used to be – talk to people, dig through a lot of documents and take the time to think through the bigger picture.

What is your preferred way to work with PR professionals? How can they be of best value to you?

I always welcome PR folks getting in touch with ideas and, over time building a working relationship. We’re lucky to get a lot of pitches and all of us on staff will circulate around if they’re not quite right for one person and we honor embargoes. One way to stand out with Sportico is to provide something exclusive – even a period of exclusivity as short as an hour or 30 minutes ahead of a public announcement where we can have our story out first holds a lot of currency with us. It really can be the deciding factor to devote our limited resources to covering a story we may otherwise have to let go. More generally, PR people are valuable when they’re pros – we all have our jobs to do and I always appreciate someone who does it the right way. Lying to delay a story or nitpicking on language after the fact sometimes work to get what you want in the short-term, but it’s something that doesn’t get forgotten.

This generation of athletes seemingly has a much larger focus on business success outside of their sport than those before. We see athletes with production companies, VC funds, and more – what do you think has led to the rise of the athlete/business dynamo?

That’s probably a bigger question than I can answer fully, but it’s a fascinating one. I think athletes recognize they have a half-life to capitalize on their celebrity – this is an industry where you can be considered old at 30 and almost always out of the game by 40. They also see the tremendous growth in the valuation of teams and media properties built on the basis of the game they play and rightfully wonder why they can’t be entrepreneurs, too, in the business, instead of “just” very well paid players. I also think it comes with the shift in how consumers digest sports and media – things are very much more personal and personalized – and athletes are in tune with attitudes of the younger consumer driving the disruption we’re seeing throughout business.

What is your favorite sports story of the last year that you told? On the flip side, what was a great sports story that you don’t think got enough attention?

It’s hard not to say SPACs, because they really exploded into prominence last year. Now every day I spend at least sometime writing about a new SPAC or mulling ways to advance the coverage in a way that’s meaningful to readers. Roughly a quarter of SPACs have some sport of sports connection, either a desire to buy a sports or sports-adjacent business or involve an athlete or team owner. It’s been fun to ride that wave, for sure.

It’s not overlooked necessarily, but fractional ownership in sports – from racehorses to collectible cards – really took a step forward in 2020. It’s a fascinating way to get more people involved and I’m interested to see how it will develop.

To keep up with Brendan Coffey, follow him on Twitter, connect on LinkedIn, or check out his byline at Sportico.

Interested in sharing your insights in journalism, marketing, PR firms or communications in a future installment of In the Tank? Drop us a line.

Michael Canova is an Account Manage at FischTank PR.